President Donald Trump is supposed to be on vacation staying at his golf club in Bedminster, New Jersey while the White House undergoes much-needed renovations. Except he does not seem to be doing much resting or relaxing, choosing instead to make this a working vacation.

Tuesday evening was no exception as President Trump gathered some of America’s most successful and influential business leaders for dinner. The dinner was an opportunity for the president to hear directly from American industry leaders about how to keep the American economy booming. Among those included were Boeing’s chief executive officer Dennis Muilenburg, FedEx president and CEO Fredrick Smith and Fiat Chrysler CEO Michael Manley. 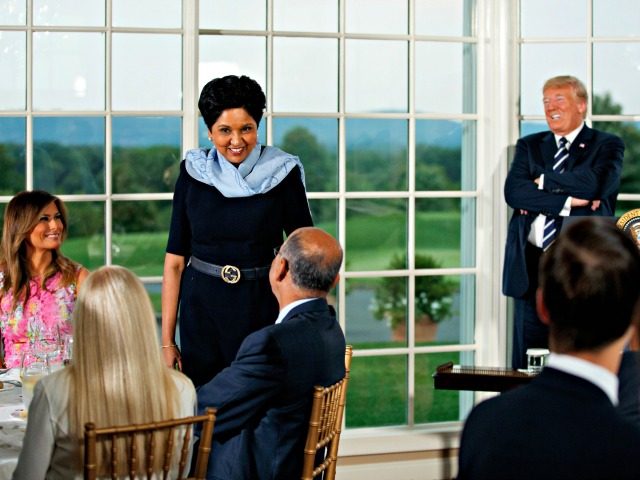 The full guest list according to the White House –

According to a White House pool report, President Trump addressed the power dinner saying that he is meeting with some of the top business leaders in the world.

“You talk about business, this is the group,” President Trump said. “And we’re so honored to have you. And we’re gonna be discussing later on some of the ideas you may have to, as the expression goes, make America great again.”

He continued with – “Through tax cuts, deregulation, powerful trade policies, and unleashing American energy, we’re now the largest in the world.  We’re taking our economy to incredible new heights.  Many of the great business leaders — and I’m just going to ask them because they are so incredible and represent such a very important thing for our country — they represent success — I’m just going to ask them to just stand up and just introduce themself and their company.”

He then added that the powerful business group had been a big beneficiary of the government’s policies, stating – “I’d like to take this opportunity also to briefly highlight some of the administration’s key economic accomplishments. As you know, we’re doing record and close-to-record GDP. Nobody thought we’d be anywhere above, even close to 2. And we’re at 4.1, and I think we’re going much higher. And as trade deals come in, we can go much, much higher.”

The pool report added that President Trump is hopeful that the country’s economic growth in the next quarter will reach in the fives, adding – “Economic growth, last quarter, hit the 4.1. We anticipate this next quarter to be — this is just an estimate, but already they’re saying it could be in the fives. Each point — it doesn’t sound like much because, when I first started, we were at 1.2. Each point is $3.5 trillion and 10 million jobs. That’s some number.”

“Trump went around the room asking executives and CEOs how the American economy is working (or not working) for them. He received a number of colorful responses. To kick off the round of comments, Trump recognized the business leaders sitting at his own table. When he got to Melania, Trump had a compliment ready.

“Melania addressed the group briefly saying, “Welcome to Bedminster. It’s great to have you here. And we’re looking for a great discussion tonight. And I just want to thank the president for doing an incredible job and for all of your help. Thank you very much.”

“Later in the night, Trump addressed one of the female CEOs in the room, saying, “I’m going to ask a very powerful woman — she’s always at the top of the “Most Powerful Women in the World” — and, no, Melania, I’m not talking about you.'”

Nooyi was referred to as one of the world’s most powerful women by President Trump. Nooyi, 62, will step down from PepsiCo’s CEO post on October 3 this year after leading the food and beverage giant for 12 long years. PepsiCo veteran Ramon Laguarta is slated to take over as the CEO.

Reuters reports of the economy under President Trump’s leadership –

“Under Trump, a real estate developer and former reality television star, Republicans last year passed a massive $1.5 trillion tax law that included a permanent cut for corporations and a temporary one for individuals that the White House wants to now make permanent.

“The White House has also floated the idea of sidestepping lawmakers to pursue another tax cut for investors.

“Trump’s administration has moved to eliminate a number of regulations that it has argued were burdensome to companies, even as Democrats and other critics argue that lifting environmental and other restrictions threaten the public.”